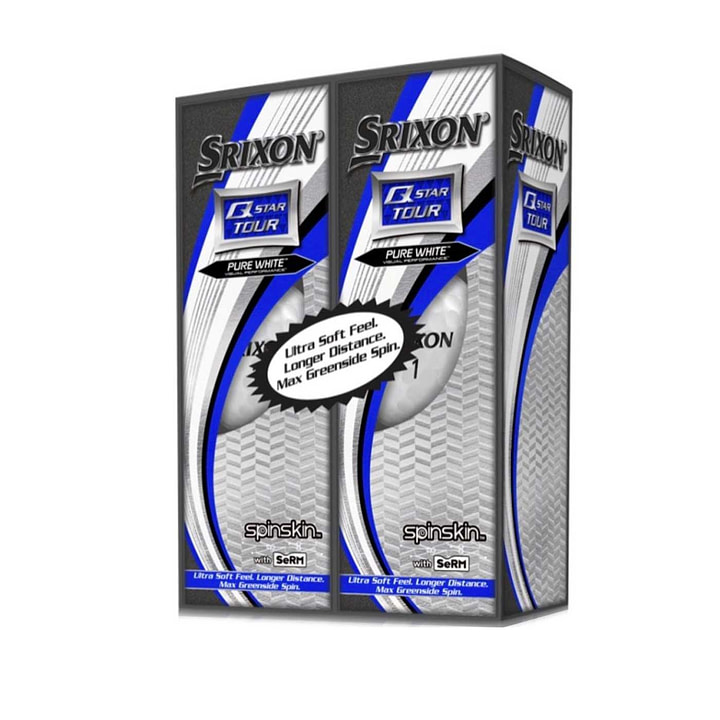 Get the power and performance of true tour balls, but play with a softer feel at impact. These are the all-new Q-STAR TOUR golf balls – our softest ball with tour level performance. Professionals demand a lot from their golf ball. They want distance to get ahead of the competition and enough greenside spin to attack the toughest pins. Typically, all this performance comes with a higher compression and firm feel. Q-STAR TOUR breaks that mould. It’s our lowest compression golf ball with premium materials for golfers who want pro-level performance with a softer feel. With the largest core in its class and FastLayer technology, Q-STAR TOUR golf balls are fast off the face and long off the tee. Its new SeRM urethane cover delivers ‘one-hop stop’ control for the ultimate combination of distance and spin.

SpinSkin with SeRM is a proprietary golf ball coating developed by Srixon. With the technology’s tour validation and its many wins across the globe, we’re bringing SeRM to the all-new Q-STAR TOUR. The coating enhances spin at an atomic level because its molecules are bonded together using Moveable Cross-Links. These cross-links work like microscopic pulleys and ropes, distributing loads evenly among the molecular chains that are the building blocks of Q-STAR TOUR’s urethane cover. That even distribution of shearing force makes SeRM urethane incredibly elastic. So elastic, in fact, that it expands into your wedge and iron grooves at impact. That added bite increases friction on all your approach shots. And that extra friction means more spin and more control every time you hit into the green.

How can you fit tour distance and exceptionally soft feel into a single golf ball? FastLayer. We start with the core of the core. Then, we add the layers. Thousands of them. Until we’ve built a core that’s firm enough to deliver the explosive distance you expect, yet soft enough for feel you never thought possible in a tour ball.

With its graduated transition from soft inner core to firm outer edge, FastLayer behaves like a core with thousands of layers, giving you distance and soft feel without compromise. The new Q-STAR TOUR golf balls feature our softest FastLayer core with tour calibre performance. It’s the largest core in its class, so it’s the largest engine in its class. That means distance and short game spin like you’ve always seen on tour, but softer feel than you’ve ever seen on tour. A softer core also dramatically reduces long game sidespin. That means your driver and wood shots fly straighter and stay on target for more accuracy off the tee

The 338 Speed Dimples featured on Q-STAR TOUR golf ball improves overall aerodynamics for better flight performance with drivers, woods, and irons. With just the right combination of dimple uniformity and dimple occupancy, the Speed Dimples boost distance and go straight, even in the toughest wind conditions.

Speed Dimples reduce drag and increase lift, creating just the right aerodynamic conditions for maximum flight distance. A lower drag coefficient means the ball cuts through air with less resistance for more speed and a more penetrating launch. That reduced drag also fights against the wind, so your shots fly straighter in harsh conditions. A higher lift coefficient pushes up on the ball throughout its decent, slowing its fall and forcing it to stay in the air longer for maximized distance

In stock products will be shipped same day if ordered before 12 noon Monday - Friday next working day delivery.

Weekend orders will be processed on the next working day.
All orders processed after 12noon will be shipped the following working day.
Products out of stock will either be on back order or in the process of replenishment.